In December last year, I blogged about gold hovering around $1,200 an ounce, comparing that to to an earlier message when I reported it was about $800 per ounce.

Today, it probably will close above $1,300 per ounce. Silver is tagging right along behind it, having moved from about $12 an ounce to above $21 per ounce when I checked last. 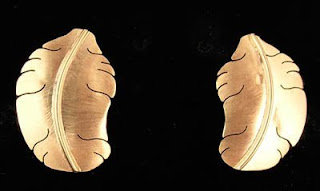 part in the making of of the Native American jewelry. Gold is less important these days because the price of gold has moved above the investment level of many American Indian jewelry artists.

Will silver be the next precious metal that becomes "too precious" for use in native American Indian jewelry?

No one knows. And no one should encourage you or anyone else to buy either gold or silver as an investment. If you have the resources, the ability to take the risk and a lot more knowledge than we can impart here, it might be worth making it a part of your investment portfolio.

On the other hand, we know that the increase in the value of gold, and more important recently, silver, means that jewelry we acquired at much lower gold prices and silver prices are much more valuable today. If history repeats, it will become more valuable still.

Here's the really good news. None of the precious metal jewelry items we have for sale has been increased in price. We are charging exactly what we were back then. Clearly, the replacement cost will be higher. But that is for us to worry about.

As the Holidays approach and gift giving begins to rise on our interest levels, this is an excellent time to visit our Native-JewelryLink web site and shop.

For the month of October, we will even ship jewelry orders domestically at our expense, free to you (exclusive of insurance, if requested), just to get you in the Christmas shopping mode.

Of course, as always, if you are unhappy with your purchase from us after you receive it, you have seven days to let us know and a reasonable time thereafter to send it back for a refund. If you purchase it as a gift, we will honor the return privilege until 10 days after Christmas.

Stop by and see some of the most gorgeous Native America Indian jewelry you will ever see, artists such as Begay, Plummer, Jackson, Dewa, Ration, Coonsis and others. Thank you.
Posted by TribalArtery at Thursday, September 30, 2010 No comments:

In this case it is a Navajo Ganado Style rug that was stolen on Sept 22, 2010 from the Phioenix Tribal Arts Show.

Please be alert for anyone trying to sell this rug. It is stolen property and it is against the law to possess it.

Thank you.
Posted by TribalArtery at Monday, September 27, 2010 No comments:

Around 400 years ago, as the Spanish conquistadors moved north from into the pueblo lands in what was to become the , they brought with them Catholic missionaries, to spread the story of Christianity.

As the story of Christ’s birth began to permeate some of the beliefs of the native people, it began to find a place in pueblo Indian culture.

Eventually, the Nativity became a staple as a subject for several potters. Now, some of the beautiful pottery being created portrays the Nativity scene.

We recently returned from the Southwest, where we had the opportunity to acquire some new Nativity sets.

Three of them are pictured below.

For more details including price, a quick click on the pictures here will take you the object’s page on our pottery web site.

With Christmas rapidly approaching, this is a excellent time to comnsider acquiring on of these or our other Nativity sets to celebrate Christmas in your home. And to own a magnificent work of Native American art that your family hand down from generation to generation,

PS: As I wrote this blog, I was reminded of a more comprehensive article I wrote for broader publication a few years ago. I have posted it here.

Posted by TribalArtery at Wednesday, September 22, 2010 No comments:

The definition of "smitten" - how I fell in love with this beautiful six directions fetish carving by Jeff Shetima. The Gallup InterTribal Indian Ceremonial judges agreed apparently since it received the Best of Category Blue Ribbon at that competition. Anyway, here's a video look at it.

Hope you enjoy looking at it as much as I enjoy owning it. Someday it may even show up on our ZuniLink fetish web site. And thanks to Jeff Shetima for his inspired artistry.
Posted by TribalArtery at Thursday, September 16, 2010 2 comments:

Well, not exactly out of "hiding". But, until now these vintage Australian Aboriginal artefacts have been in our private collection and not shared publicly on the Web. As of this weekend, they have been added to the web site and may be seen in all their glory and detail at TribalWorks.com (navigate to the Australian Room).

Here are some sneak previews.

This smallish woomera (spearthrower) was acquired from well-respected Aboriginal art dealer, Tony Bond, in Adelaide, Australia, in 2000. The age was estimated as ca. 1950s.

This somewhat larger woomera was acquired from a private collection in Sydney after the death of the collector. It's age is estimated at ca. 1950 as well. If you look closely you can see incisions that have been inscribed on the thrusting face of the object.

The next item is a "message board" - a carved oblong of would with Australian Aboriginal iconography etched on it's face. Message boards were used to communicate between Aborigibal groups in the desert. We have high confidence that this item is more than 100 years old. We acquired it from a dealer i 1996 who attested that it was originally acquired by a government officer in the 119th century.

Finally, here is a "fighting" shield, although it probably was used more for dancing. since Aborigines very seldom fought. It has been reported that settling of inter-tribal grievances would be done by the aggrieved groups confronting one another, dancing in threatening ways, and returning to their camps with both sides claiming victory. True? At least, it's a nice story in these days of mayhem and violence.

All of these pieces and more may be inspected more closely by visiting the TribalWorks web site, clicking on the "Australian Room" and then clicking on "carvings".
Posted by TribalArtery at Sunday, September 12, 2010 No comments:

Tribal Art from our private collection

Poking around in our personal collection, we have turned up a couple of items never before presented to our public. 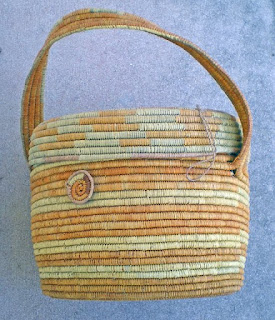 One Australian Aboriginal item is a beautiful, round, hand-woven basket done in pandanus fiber, with a firmly fitting lid, a four-coil handle and rosettes on each side. We acquired it in Cairns, at the Capricorn Gallery.

At the time, it was highly regarded by the gallery owner, as an outstanding example of the basket-weaving tradition and skills of the Australian Aboriginal artisans from the Oenpelli/Kakadu region of the Northern Territory.

Unfortunately, the name of the basket weaver has been lost to the ages.

Pandanus is a common plant fiber from the Australian outback and top end, that is used for basket making. Colors are achieved by dying the fibers with natural ochres, ground into a fine powder and boiled in water.

This basket is a true expression of Australian Aboriginal culture and art in a functional piece. It is possible to be moved by the spirit when looking at it and feeling the quality of the weaving.

A second item from Aboriginal Australia is this carving of a parrot. We believe it was created by an Aborigine artist from Groote Eylandt, a sizable island to the north of the Australian mainland in the Gulf of Carpentaria. The Blitners are a well-known family of artists from Groote Eylandt and we feel one of them could have been the creator of this remarkable piece.

Regional cultures within Australia can vary widely in their traditions and art styles. The somewhat rough quality of this carving suggests it is rather old piece, although we can not attest to its age. We find it very powerful, reflecting portrayal from a time when parrots were important totems in Northern Australia. It is one of our favorite vintage pieces, standing 26" high with a 4.5" diameter at the base. Colors were achieved using natural ochres, kaolin and charcoal.

Eventually, both of these items will find their way to our web site. If you are interested n acquiring either of them, please visit us at TribalWorks.com and navigate to the Australian Room.

You are always welcome.
Posted by TribalArtery at Tuesday, September 07, 2010 No comments:

One of our favorite Native American artists is Salvador Romero of Cochiti Pueblo. Sal carves differently from most Zuni fetish carvers. Whereas Zuni fetish carvers tend to carve in special gemstone and other commercial materials, Salvador carves stones and rocks that he harvests from the grounds of his pueblo. In this video, he talks about the process of finding carving material and how it leads him to what to carve.

ZuniLink, a name we chose because the preponderance of fetish carvers are Zuni, carries several pages of Salvador's carvings. Newly acquired one will be posted to the Web site shortly In the meantime, take a look at what's available now from this talented carver.
Thank you.
Posted by TribalArtery at Wednesday, September 01, 2010 No comments: