Entitled, Collecting the Dots, the article charts the history of Australian Aboriginal art in the commercial marketplace. In 1971, an English schoolteacher encouraged schoolchildren in the northwestern territory community of Papunya to paint on the walls of their concrete block homes.

In short order, the tribal elders became so excited about seeing their ancient dreamtime stories portrayed that they joined in. Soon, the paintings evolved to masonite boards and canvases. Palettes evolved from natural ochre, charcoal and chalk to acrylics and commercial colors.

The designs, which were not called “art” by the Aboriginal artists - there is no word for art in any Aboriginal language – began to merge into perceptions of modernism, although they were rooted in the timeless stories passed down from generation to generation telling of the Creation, or Dreamtime. Often called "Dreamings", the stories describe the arrival on the face of the earth by ancient ancestors, and of their interaction with the landscape and geography.

Captivated collectors, such as Wilkerson and Richard Kelton, began to acquire the works of the “mob”, as the desert painters were called. These works by the likes of Johnny Warangkula Tjupurrula, Mick Namararri Tjapaltjarri, Shorty Lungkarla and Clifford Possum Tjapaltjarri became the core of a show that began to tour the . "Dreamings: The Art of Aboriginal Australia" was shown in , and in 1988.

Early paintings, for which as little as US$80 or less was paid, laid the groundwork for auction results which began to amaze the art world. In 2007, a work from 1977 by Clifford Possum has hammered down at US$2 million in a Sotheby’s Auction in .

Granted that Clifford Possum had taken the genre to new concepts with that painting, “Warlugulong”, which portrayed the total of Possum’s Dreamings as a map seen from above in a huge canvas.

I encourage you to visit ArtNews Archives to read the entire story.

But first, a side trip to a tale of two collectors who were active in Australian Aboriginal art at about the same time. Susanne and I began our collection in the late 1970s, traveling to to acquire a few pieces. Then back again in the mid-90s, when we ventured back to , up to and to the Yirrkala community at Nhulumbuy (Gove). We also revisited our former home in where several Aboriginal resources were available. Our last trip to was in 2001 (September, to be exact; a very memorable time). On that trip we visited again, the , Maningrida, Oenpelli, and down the to , , then flying to .

But this is not about our travels. It is about our relationship with the art.

In the meantime we had moved to . About the time the “Dreamings: The Art of Aboriginal Australia” was touring the , we moved to . We opened our gallery, Aboriginals: Art of the First Persons, on . By the late 90s, we had two shows featuring works from our collection. One at the Museum of Fine Art in Owensboro, KY, and one at the Alliance for the Arts in Fort Myers, FL.

Little did we appreciate that we were in the vanguard of Australian Aboriginal art’s growing world-wide popularity. All we knew was that we had several paintings by outstanding Aboriginal artists, works that bring beauty and grace to our lives and home.

We include all the paintings, desert paintings and bark paintings and artifacts, on our web site at TribalWorks. We invite you to enjoy them with us. 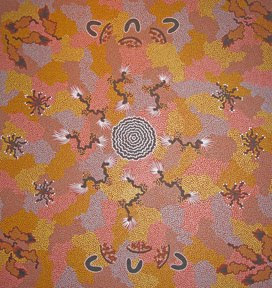 Of possible additional interest is this video that discusses the care and storage of these valuable works of art.

PS: Shortly after Hurricane Charley smashed into Sanibel and , we closed our Sanibel gallery, deciding to exhibit and sell exclusively online. Nothing was damaged in the storm; not us or any of the art. But we took it as a sign that it was time, after 16 years into a 15-year project, to do things differently.

Reprinting verbatim from SWAIA We greatly regret that we will miss this show as we at Aboriginals: Art of the First Person are great fans of Ira Lujan and Spooner. We have a few glass works by Ira, including this one that was made on commission from us. Please visit our websites at Native-PotteryLink.com, Native-JewelryLink.com and ZuniLink.com
Native Modern Art and Design Series Continues
with Photography and Glass
Who: Legends Santa Fe and the Southwestern Association for Indian Arts (SWAIA)
What: Native Modern: Art and Design Series. Paper and Glass
Where: Legends Gallery: 143 Lincoln Ave. Santa Fe, NM (505) 983-5639
When: Friday June 4, 2010 6 p.m. to 8 p.m.
How Much: Free

The Southwestern Association for Indian Arts (SWAIA) and Legends Santa Fe is presenting the most ambitious exhibit in its Native Modern: Contemporary Native Art and Design Exhibit Series. Following the success of "Precious Metal" and "Against the Grain," the third installment of Native Modern "Paper and Glass" will push the definitions of Native art into unexpected places.
With established and award winning artists including, 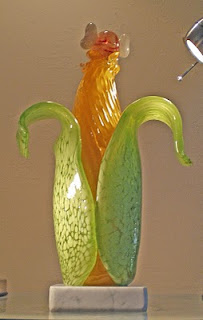 Paper and Glass promises to be the most talked about Native art gallery show in recent history. The use of glass and photography by Native artists as materials for their creative expression embodies a strikingly clear, dynamic and unclaimed energy. From the socio-political to the broader language of commodity and culture, Paper and Glass reveals a new bravado in Native self-representation.

The Native Modern series of exhibits debuts a new show every month at Legends Santa Fe. SWAIA and Legends Santa Fe will seek distinctive and previously untested ways of bringing Native artists together from across cultures, media and themes. The shows, like Indian Market, will be at once traditional and brimming with innovative ideas. The result will be the presentation of Native art unlike anything else in Santa Fe.

This posting and the "borrowed" youtube video are presented by the proprietors of Aboriginals: Art of the First Person, who also host websites devoted to African tribal art, Australian Aboriginal art, Native American art, jewelry and pottery and art from other tribal traditions.

I stumbled across this essay on beauty and art by Philosopher Roger Scruton. It started me thinking about the role of "beauty" in tribal art.

When we look at tribal art, certainly authentic tribal art, we usually see what the artist perceived as "beautiful" within his or her culture.

I think of exquisitely carved African masks and sculpture, shimmering Native American jewelry, lovely Pueblo Pottery, Inuit carvings that please the eye and Australian Aboriginal art that may challenge Western concepts of beauty but represent attempts by those artists to create beauty in their daily life.

Moreover, given the cultural values of Aboriginal art, why would any artist want to reflect on it with shame or mockery?

So it strikes me that lovers of tribal art are privileged to apply their devotion to fields where art that mocks beauty is rare and seldom seen.

What do you think?

This summary of impending events of interest to collectors and admirers of Native American Indian and other tribal art, is presented by Aboriginals: Art of the First Person and its allied web sites at Native-JewelryLink.com, for fine, hand-made Native American jewelry, Native-PotteryLink.com, for authentic Indian Pueblo pottery, TribalWorks.com for a mix of African, Australian, Arctic and Navajo folk art, and ZuniLlink.com, offering outstanding Zuni, Cochiti, Navajo and San Felipe carvings by top fetish carvers.
~~~~~~~~~~
May 30-31 - The annual Jemez Red Rocks Arts and Crafts Show at Jemez Pueblo - Call 505-834-7235

This is a report from Aboriginals: Art of the First Person , proprietors of TribalWorks.com, which deals in tribal art, including Australian Aboriginal paintings.
Well, not the actual Eunice Napangardi. She unfortunately passed away about five years ago.

This Eunice Napangardi is a lovely Australian Aboriginal desert dot painting created by Eunice in about 1995. We have had it in our collection since 2000.

It was a portrayal of the Bush Banana dreaming, which Eunice's clan is entitled to paint. 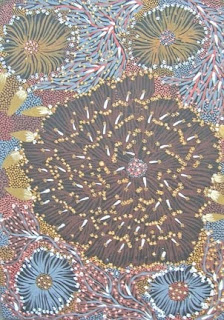 Her paintings depict variations of the radiating vines of the bush banana plant, which grows in rock crevices close to the dry river beds. Known as Yuparli in the Aboriginal language of Eunice's Warlpiri home near Yuendumu, it is gathered by the Aboriginal women both as fruit and as medicine. Bush Banana is very important in Aboriginal culture because of its combined healing and nutritional qualities.

Bush Banana Dreaming (signifies the journey of Yuparli ancestors). In this respect, it is like many Aboriginal dreamings, which portray various aspects of Aboriginal history and mythology. Such paintings were originally done by men artists, on the ground at corroborees (or clan gatherings). As a result, they also were often referred to as sand paintings. Among their purposes was to share the culture with younger members of the clans as they grew and acquired knowledge.

Eunice was one of the first women painters, emerging shortly after an English art advisor in the desert convinced tribe members that it was okay to paint their stories. Even then, the deep meanings of the symbols, shapes and icons are not shared outside the clan, and often not outside the senior men.

Now, Bush Banana Dreaming by Eunice Napangardi has found a new home with a wise investor in Aboriginal art.


Eunice's paintings are totally unique. She demonstrates a great artistic flair and surety of touch in her ability to represent one dreaming.

Posted by TribalArtery at Saturday, May 08, 2010 No comments:

Watch out for stolen concho belt

The Antique Tribal Art Dealers Association (ATADA), of which Aboriginals: Art of the First Person is a member, has issued an alert for a concho belt believed to have been stolen from a motel room in Gallup, NM.

The belt is a Zuni needlepoint turquoise concho belt by the Panteahs, using Sleeping Beauty turquoise. It was created in the 1970s.

At the time of the theft, the belt was owned by Pat Harrington.

For more information visit the theft alert page at http://www.ATADA.org

Keep your eyes open for the stolen item. It is important for anyone who encounters it to notify the authorities or Pat Harrington at 505-256-1023.

Possession of stolen property is a crime.
Posted by TribalArtery at Thursday, May 06, 2010 No comments: