We have been able to gather on one page all of the work in Native-American-Jewelry.org's collection by artists who have been accepted to show at this years SWAIA Indian market. Click on the link to visit our "one stop Indian Market shop."


This is not work that will be shown at this years Indian Market. These are earlier pieces by the same artists. Enjoy.
Posted by TribalArtery at Friday, July 27, 2012 No comments:

But, for now, here is the "breaking news".

Come back and visit the blog again for updates. It's going to be a great market!!!
Posted by TribalArtery at Wednesday, July 25, 2012 No comments:

30% off for Native American Christmas pottery

Christmas is a long way off - relatively.


But, like everything else on the calendar, it will be here before we know it. So, at Native-PotteryLink we are offering July savings on Native American pottery items themed to Christmas.


This includes pottery nativity sets and figures representing Santa Claus and his helpers.


For the month of July, we  will reduce the price of any of these items by 30%. Simply visit the Native-PotteryLink.com web site and choose the pottery you want to acquire.


Deduct 30% from the listed price and that is the price you will be charged. (We don't change the prices on the page because the prices will return to that level when the sale is over.)


Get a head start on the season and you will have your Christmas items on hand when it's time to decorate.
Posted by TribalArtery at Monday, July 23, 2012 No comments:

We opened our physical gallery on Sanibel Island 22 years ago this month, after 10 years of trading in Tribal Art in Chicago. One of the first Native American artists we represented was Salvador Romero of Cochiti Pueblo. On more than one occasion he visited the gallery to demonstrate his skills.


Around 2006, we closed the store and moved our entire ZuniLink, Native American jewelry, Native American Pueblo Pottery other operations online. Salvador and his brother, Wilson Romero, and his nephew-in-law, Lionel Sanchez, have been carving for us ever since. While Sal has had others selling his work, which we think is great for all concerned, we are proud to be associated with his early days and the growth of his popularity.


In honor of this anniversary, and as a thank you to all who have given us their business, we are offering every carving by Sal, Wilson and Lionel in our inventory at 25% off the listed price. Look at these directory pages to see what is available.


http://www.zunilink.com/Salvador-Romero-Cochiti-carvings-2.htm (also has an interesting video of Sal)

The meaning of quality in Native American art?

What is the meaning of quality when evaluating and discussing Native art?
SANTA FE, New Mexico—SWAIA and Collected Works Bookstore present conversations about the meaning of quality when evaluating and discussing art.  What is quality and how it is determined will be the topic of a series of provocative panel discussions.  The first panel, “Authenticity in Native Art,” will take place at Collected Works Bookstore (202 Galisteo St, #2) on Thursday, July 12 at 6 pm. Authenticity and materials are often used as means to discuss and describe quality.  This three-part series of panel discussions engages artists and brings authorities together to examine the meanings of “authenticity” in Native art and related topics of concern to the community. SWAIA will use these topics to engage artists by asking them to respond to two questions:  What is “authenticity” in Native art, and what is its importance to quality?  Questions will address the roles and relevance of authenticity to creativity, cultural preservation, and quality of art, aside from art market value.  SWAIA asks artists themselves to define quality and artistic excellence at Indian Market. SWAIA and Collected Works Bookstore invite the public to hear from the experts in these lively discussions on Thursdays, July 12, July 19, and August 2. Artists alone will make up the first panel, joined later in the series by curators, community leaders, and other stakeholders on Thursday, July 19 and Thursday, August 2.   The panels are part of SWAIA’s investigation into quality and its commitment to upholding standards of excellence as the preeminent authority in Native art. All panels begin at 6 pm and are free of charge.  For more information, visit www.santafeindianmarket.com.
Posted by TribalArtery at Monday, July 09, 2012 No comments:

Australian Aboriginal art is Barking up a different tree.

In , famous for bark paintings by Aboriginal artists, paper is moving up as an alternative medium to bark.

The advantages for artists, and buyers is that paper is readily available year-round, while bark can only be harvested from trees during and after the December-June wet season. Removing the bark kills the tree.

Paper, on the other hand, is cotton-based. It's also much easier to ship. As Aboriginal art has become more popular, with demand in distant places, shipping costs and difficulties have become important factors. Bark is a problem in this regard.

Warping and becoming moldy can make the bark unattractive and undesirable for hanging. As bark gets older, brittleness and cracking similarly diminish it's appeal and marketability.

Archival paper has a density and texture similar to the surface of bark, which accepts ochre paints well. Guache is used to prepare the surface for painting.

Some of our favorite images on paper come from Injalak near Oenpelli in the North of Australia.  They report that paper is responsible for more than 75% of their painting sales. As important as paper has become, cultural fidelity places the decision of what medium to use in the hands of the artist. 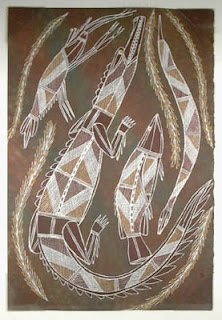 More examples of Australian Aboriginal bark-style paintings on bark and paper can be seen here http://www.tribalworks.com/Australian_Aboriginal_Bark_Painting_Gallery.htm.
Posted by TribalArtery at Sunday, July 08, 2012 No comments: