It started before we traveled to Santa Fe this year.

A customer told us that she had seen a carving by Sammy Smith that she was interested in buying but it had already been sold by the store where she was shopping.

We were slightly acquainted with Sammy’s work but it was the result of the rare carving of his that we picked up through trusted third-party wholesalers.

Based on her request, we set out to find Sammy Smith, introduce ourselves personally and purchase a carving similar to the one the customer was looking for. 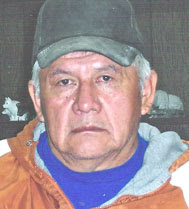 We finally found Sammy (pictured here) in Gallup, New Mexico, at small workshop on Route 66. (The legendary Route 66, where millions have gotten "their kicks", runs through the heart of Gallup.)

We walked into a veritable feast of carvings, each one more fascinating than the last. Once we started, we put aside dozens of carvings. We were particularly struck by his horses.

We have several collectors who are horse lovers. A few of them asked us to look for horse carvings that they could add to their collections. Sammy Smith gave us a big head start.

Here are a few examples of Sammy Smith’s wonderful carvings: 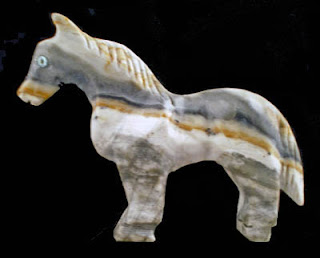 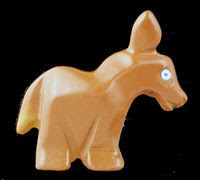 Not a horse, but how clever is this pipestone donkey by Sammy Smith? 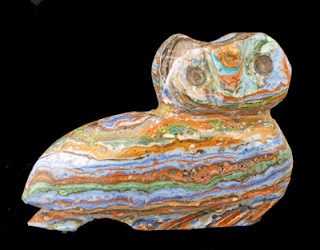 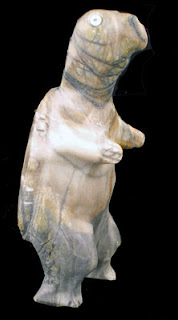 Sammy Smith is a stand-up guy when it comes to this Picasso marble turtle. 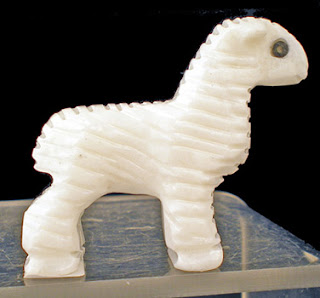 Sammy Smith had a little lamb. Its fleece was white as marble.

When you visit, be sure to click through to Sammy's second and third pages as well.
Posted by TribalArtery at Sunday, September 30, 2007

There are several new items by Lynn Quam, 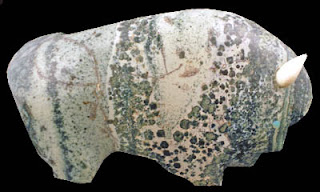 Argite buffalo by Lynn Quam
and more by his wife, Jayne. 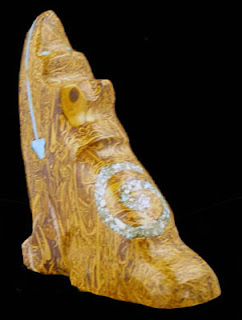 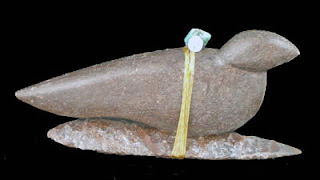 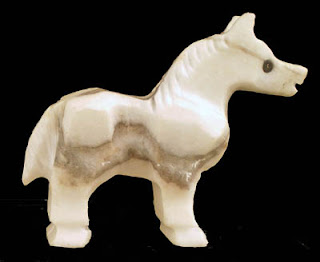 Marble horse by Sammy Smith
Also, if you are a horse lover, check out the new horses on ZuniLink. 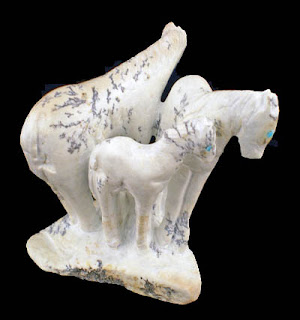 Soapstone by Zuni Hubert Pincion
And check in again for more additions. (It was a great buying trip last month.)

Thank you for your attention.

Recently, the value of the Canadian dollar equaled that of the US dollar, so that Canadians now can buy anything in America at the same rate as in Canada. So, if you live in Canada or know someone in Canada, please note that every item in our web sites, including our Arctic/Inuit pieces that were purchased when the US dollar bought more value, can be purchased on a dollar-for-dollar basis.

The only limitation will be on art made from mammal parts. Those items can't be shipped out of the US, by regulation, without a special permit.

Thanks for your attention.

PS: The Australian dollar is not far behind. When we last visited Australia to buy Aboriginal art, the US dollar was worth less than 60 cents US. Now it is worth 86 US cents. That's like a 43% discount for anyone who is valuing a purchase in Australian dollars.

Back from Santa Fe for a week and we finally are getting some of our new acquisitions posted to the web site at Native-JewelryLink.

First up is a ton of bracelets, pendants, necklaces and earrings by noted Navajo jewelry maker Calvin Begay.

We met with Calvin in our hotel room in Gallup after running into him in Santa Fe. Normally, we would meet with him at A Touch of Santa Fe, his [former] company in Gallup. In Santa Fe, however, he told us he has parted company with TSF and now is operating on his own.

This means that any Calvin piece sourced from TSF should be very closely inspected. Is it signed by Calvin? Some residual designs (even those not signed by Calvin) still are coming through. But anything being offered from TSF hereafter may not be Calvin's work. That doesn't make it inferior. It just isn't Calvin's work, if that is what you want. Look very closely at the quality of the inlay and channel work.

We guarantee that any piece we sell as Calvin's is Calvin's and has either been acquired directly from him or certified by him as his work. Any purchaser who determines that a Calvin Begay piece he or she has purchased from us is not - in fact - a Calvin Begay piece, will receive a complete purchase price refund if he or she returns the item to us and lets us know within 10 days of receipt that he or she is doing so. We will even cover the return shipping under those circumstances.

Now, here are some samples of what you will find on Native-JewelryLink's Begay pages. 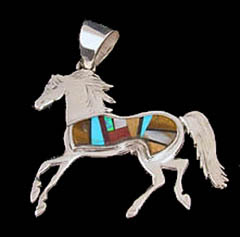 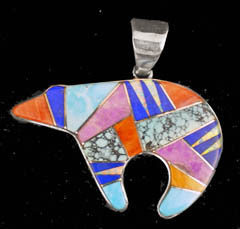 Sterling silver bear pendant with inlaid turquoise, shell, lapis and opal, reversing
to an etched silver scene on the back side, (see below) by Calvin Begay, master
Native American Indian jewelry maker from the Navajo Nation. 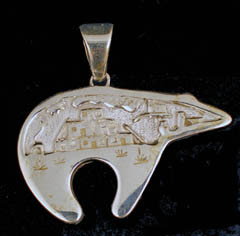 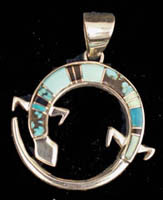 Many more examples are available at the Native-JewelryLink website. Enter the search word "Begay" in the search field or scroll to the bottom of the page where the Begay pages are highlighted in green.
Posted by TribalArtery at Friday, September 14, 2007

Now, ZuniLink is proud to announce that it has acquired this award-winning carving. It will shortly be added to the inventory at ZuniLink.

Photos are included below: 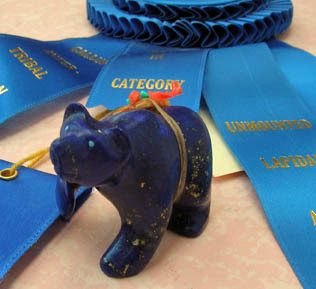 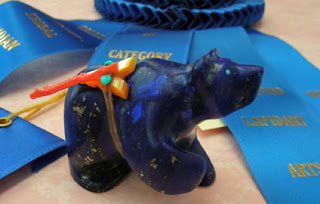 Pricing has not yet been determined.

Posted by TribalArtery at Saturday, September 01, 2007