Tribal Art - Who's writing this stuff?

As some of you may know, I also am a writer in addition to being a collector/dealer in tribal art. So I am surfing around looking for the opportunity for some freelance writing assignments.

(Hey, as wonderful as our clients are, and they are, and as resilient as our market is, and it is, I'm always looking for new writing gigs.)

It's more a matter of passion than income. It's a good thing. I am checking out some freelance writing leads and finding offers for 10 articles in a day at $1 per article.

You read it correctly. $10 for 3,000 to 5,000 words, with required appropriate research. Since this would take most writers a full day, that's the equivalent of working for $1 an hour.

What kind of a writer will work for that?

I think the work product those buyers are getting has to be pretty feeble.

I have worked for nothing. But I have done that on my own choice and on a one-time basis.

I would never write 10 articles in a day for $1 each. Never. (I would spend more than that on energy boosters during the process.)

So if you are reading a lot blather on other blogs or web sites, you know why.

As for this blog, I write every word - correction: I had one guest blogger, but I thoroughly edited the submission.

So when you read what's here, whether you find it interesting or not, it is not drivel written by a disinterested hireling who is willing to work for $1 an article.

It also is written by someone who knows and loves the subject. Heck, I would write this blog for no pay. Wait... heck, I do write it for nothing.

If you want to read some additional writing about tribal art, visit our web sites at ZuniLink.com, TribalWorks.com, Native-PotteryLink.com and Native-JewelryLink.com

Thank you.
Posted by TribalArtery at Thursday, February 26, 2009 4 comments:

We just received an email from a customer who ordered a pottery buffalo by Mary Small of Jemez Pueblo.

"I just wanted to tell you that the Mary Small buffalo arrived and it is absolutely fantastic, unusual, and an incredible addition to our Mary Small collection. Both of you are stupendous buyers with an eye for excellence, creativity, and uniqueness. So thrilled that I found your website. "

Here's a photo of the buffalo object of his affections. 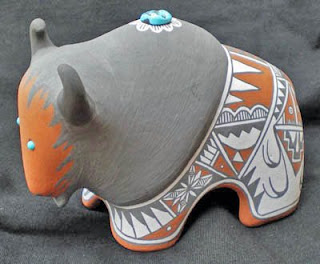 We love it when this happens. It completes the circle of our satisfaction and rewards from involvement with Tribal Art.

You can read this and other testimonials on our web sites at ZuniLink. Com, Native-PotteryLink.com, Native-JewelryLink.com and TribalWorks.com. Thank you.
Posted by TribalArtery at Sunday, February 22, 2009 5 comments:

Tribal Art - Is it growing in awareness and favor?

KIM PALMER has written in the Minneapolis Star Tribune (2/12/2009) about the growing popularity of African tribal art, which she attributes in part to the election of Barack Obama as President. Here are some excerpts:

"At first, it was kind of a fad," said Angie Scott, a St. Paul interior designer and owner of Access:Dezign. But globalization is fueling broader awareness and appreciation of other cultures and their aesthetic traditions.

For many black Americans, African-inspired design remains a celebration of cultural pride. "We're just drawn to those pieces and being in touch with our ancestry," said Scott.

Among collectors of global antiques and artifacts, African pieces "faded to the background for 10 or 15 years, as Asian antiques came in," said Ian Grant, owner of Bjorling & Grant, an imported furniture and accessories showroom in St. Louis Park, Minn. "Now, slowly, at the upper end of the market, African pieces are coming back in."

And there's much to appreciate, Ta-coumba Aiken said. "Some of the finest crafts in the world come from all parts of Africa. It's an area of beautiful age-old design. People will start looking at Africa and will be amazed."

There's more to the story and you can read it here , as reported by the Sacramento (CA) Bee.

Aboriginals: Art of the First Person and its web site at TribalWorks.com is excited to see a resurgence of interest in this beautiful ethnographic art. We have many pieces for sale that fall on the low end of high-end, traditional, authentic African tribal art. Check out the masks and sculptures in our African Room.
You can do more than add an African touch to your decor. You can add a art object with a rich, African tribal heritage to your experience.

A thank you tip to to Kim Palmer, The Minneapolis Star Tribune and the Sacramento Bee, who brought this story to our attention.

Posted by TribalArtery at Saturday, February 21, 2009 No comments:

Courtesy of Antique News, we learn that Sotheby's New York has scheduled a major auction of tribal art from the Gross collection of African and Oceanic Art.

The collection was amassed by Chaim and Renee Gross during the 1940s and 1950s.

For more information, visit www.sothebys.com.
Posted by TribalArtery at Friday, February 20, 2009 No comments:

The Cottonwood Trading Post features the work of nearly 60 New Mexico pueblo artists, including 33 from San Ildefonso, who continue to follow the traditional art of pottery making for which San Ildefonso has a well-deserved international reputation.

San Ildefonso is one of the best known New Mexico Pueblos because of the famous black-on-black pottery which originated there and which was revived in the 1920s. At that time San Ildefonso, like many other Pueblos, was suffering a severe economic depression. Long standing internal conflicts, encroachment upon tribal lands by squatters and illegal cutting of timber all contributed to the low-subsistence level to which the Pueblo had fallen. When American Indian crafts began to be popular with collectors, it was fortunate for the San Ildefonso people, because although the Pueblo population was small, there were a number of skilled artisans, makers of pottery and painters, who set to work to improve the economic condition of the Pueblo. Before long, the outstanding quality of San Ildefonso pottery became known. It was then that the famous black pots were revived, primarily because of Maria Martinez, who is credited for creating the pottery style for which San Ildefonso Pueblo is most known..

Today, they command the respect of world-wide collectors of fine art. Other artists, potters and watercolor painters came to the attention of the public and although the Pueblo is one of the smallest in population, it is among the best known, averaging more than 20,000 visitors each year.

Cottonwood Trading Post has long been a part of San Ildefonso Pueblo's history throughout the years. Although ownership has changed over the years – now owned by the San Ildefonso Pueblo Enterprise Corporation - the past is ever-present in the memories of its artists and visitors. The trading post has been remodeled and updated with the times, but original beams of the grocery store and trading post are still in place.

Tribal Artery and Native-PotteryLink.com tips its "thank you hat" to New Mexico Tourism for this good news. We remember the Cottonwood Trading Post from the old days. We always enjoyed our visits there. It's good to have it re-opened.

Carol Guzman at NMCulture sends this alert. Thanks. Carol.

The Human Drive to Make Art - Tribal and otherwise

WHY do humans make art? It can be lovely. It can be stimulating. It absorbs some of the finest minds in any society. It can change hands for ridiculous sums of money. And dizzying edifices of commentary have been built around it since the time of the Greeks. But all those aspects of art beg a fundamental question: why do we do it?

An article in The Australian, Australia's national newspaper, reviews a new book by Dennis Dutton, The Art Instinct, that discusses the subject.

Dutton suggests that because all humans make art, and people from many different cultures appreciate similar subjects in art, art is an evolutionary adaptation, helping humans survive as individuals and as a species. Eventually, over the millennia, art-making traits have been absorbed into the repertoire of human instinct.

At Aboriginals: Art of the First Person we revel in the spirit of art executed by tribal peoples, and present examples at TribalWorks.com, Native-PotteryLink.com, Native-JewelryLink.comZuniLink.com and
Posted by TribalArtery at Monday, February 16, 2009 1 comment:

When does art become culture? When does culture become art? When are the two so inextricably intertwined that it’s hard to separate one from the other?

Brought to you in the interest of public awareness of the magic of Tribal Art by Aboriginals: Art of the First Person, with web sites at ZuniLink.com, Native-PotteryLink.com, Native-JewelryLink.com and TribalWorks.com

Posted by TribalArtery at Sunday, February 15, 2009 No comments:

In Tribal art, what is antique-what is vintage?

What is antique? What is vintage?

An article discussing this subject recently appeared at http://avcosa.ning.com/profiles/blog/show?id=2697035%3ABlogPost%3A1623

We recommend you visit the link for the full story.

Here is sample to get you started:

"Too often, people will mislabel items as "antique" or "vintage" - sometimes because they believe it will be profitable to do so but, more often than not, it's because they just don't know the accepted definitions. If you are one of those individuals, you'll be relieved to know that there are NO "hard and fast" definitions for these terms and my intent is to simply provide you with a rule of thumb.

Although there are no accepted "rules" defining vintage, let's start developing our definition by putting it in the appropriate context. Most collectors agree that there is a clear distinction between what is considered "antique" and what is not. Antiques are usually associated with characteristics of a certain period of time or style of manufacture."

Aboriginals: Art of the First Person, purveyors of Tribal Art at TribalWorks.com, ZuniLink.com, Native-JewelryLink.com and Native-PotteryLink.com brings you this link with a tip of the hat to Antiques, Vintage and Collectibles online sellers association
Posted by TribalArtery at Saturday, February 14, 2009 1 comment: