Here's the schedule for Native American art events in November:

Prolific and talented, Navajo artist Harrison Begay, left behind a wealth of beautiful paintings when he passed earlier this year. Friends and associates estimated between 2,000 and 3,000 paintings were completed in his unique style. But he never became a wealthy man; partly because some of the higher prices the public paid for his paintings included the costs of the dealers who marketed them. Yet he continued to paint because he loved to do it and he loved the animals that were subjects of his work. Pictured here is one of his works in our collection at TribalWorks.com. 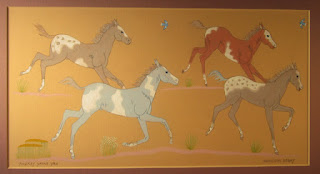 He is said to have refused commissions because he painted from the heart and had to be inspired by his subject. As a result, anyone who wanted a certain subject painted would have to wait years, until the spirit moved him.

He had been married once but he and his divorced after he returned from service in World War II. He had no children but is survived by a sister and nieces and nephews.
His passing is a loss to all who love beautiful images sensitively rendered.
Posted by TribalArtery at Friday, October 26, 2012 No comments:

Recently, within the last two years, we have discovered the work of Peter Ray James, a Navajo artist specializing in fabric pieces.

Here are a few of his pieces we have acquired in recent days. 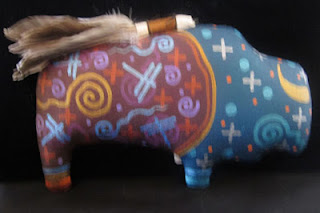 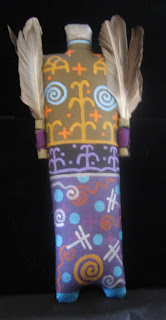 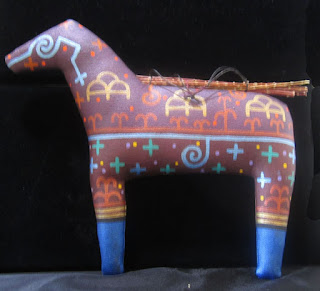 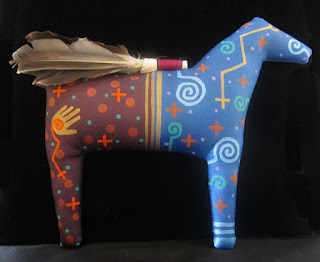 According to his bio, James graduated with honors from the Institute of American Indian Arts  in Santa Fe NM in 1984. He also attended Parsons School of Design in New York City. In 1988, his work was introduced to the competitive Indian Art market, which means our introduction to him was well into his career, In the meantime, collectors of his work have included Ahmad & Felicia Rashad, Ted Danson, Jon Bon Jovi and Wynonna Judd. His work is also offered at the New Mexico Museum and the Wheelwright Museum, both  in Santa Fe.

James's Navajo name is Nahat'a Yilth Yil Wood, which translates as "One who delivers the
message". His pieces include representation of spirit figures, yeis, horses, buffaloes - even fish. They are done in fabrics that  are dyed and painted with Navajo symbols. Twigs or feathers often are added in much same manner as prayer- or medicine-bundles on fetish carvings.

"My Navajo tradition is a path abounding with power and energy. I am enriching my life with remembrance... a spiritual path and a powerful tradition in transition"
- Peter Ray James
For more information, visit
http://www.TribalWorks.com/Navajo-Native-American-Folk-Art-Gallery.htm#DK05tag

Posted by TribalArtery at Thursday, October 11, 2012 No comments: