Mark your calendar for the Code Talkers

August 14 each year will be set aside by the Navajo Nation as the annual Code Talkers Day. This tribal holiday will recognize the heroic contributions made by the Navajo Indians during WWII.

“In all the war histories of the , no other language other than English was used except in World War II, when the for the first time in its history used the Navajo people and Navajo words to win the war.,” said Larry Anderson, Council Delegate from . He continued, “The Navajo code was dispatched by the Navajo and received by the Navajo and translated by the Navajo”.

The first platoon of code talkers to graduate from the Marine academy were recognized after the war with Congressional Gold Medals. The remainder, some 300 more, were given silver medals.

The owes a great debt of gratitude to these heroes. We encourage you to set aside a few minutes on August 14 to recognize them in your thoughts.

Aboriginals: Art of the First Person is proud of its association with the native people of our land and proud to be the owners of a hand-carved color guard of code talkers, pictured here. 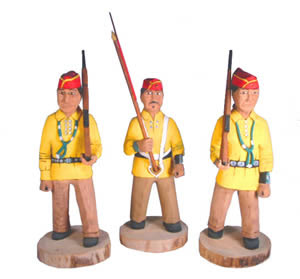 They were carved in 1997 by Renzo Reed of the Navajo Nation.

The Yale Daily News has announced the presence of an exhibition of some 135 items of African tribal art. Most of the items are from the collection of the late Charles B. Benenson, a generous benefactor of the University.

According to the article, which can be read in its entirety here, the African space was left open and undivided to encourage viewers to wander to whatever catches their eyes.

For examples of African art - masks, carvings, textiles, etc - in the Aboriginals: Art of the First Person collection, visit TribalWorks.

The last blog thrillingly announced that a new search engine was available that would allow you to search all of the Aboriginals web site with a single search term.

Sorry. Not so much.

I could not get the search engine to work on the blog, although it does work on the link pages of each site. So it has been deleted from this blog – at least for now.

If Google can walk me through installing it on the blog so that it works as promised, we will try again.

We have added a Google Custom Search Engine to our Tribal Artery blog.

If you want to search for an object of tribal art or other information about tribal art on any of our web sites, simply enter your key search word in the field below and press search. You will receive a list of links to that subject in Native-JewelryLink, Native-PotteryLink, TribalWorks and ZuniLink. Try it and let me know about your experience. Is this worth keeping?

OOOPS!!!! THE PROGRAM HAS NOT BEEN WORKING AS ADVERTISED. WE ARE INVESTIGATING AND CORRECTING. THANK YOU.