Opal is one of the most beautiful and fascinating stones used in Native American jewelry. 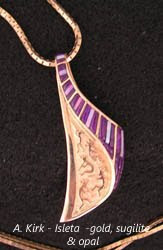 Opal is a form of silica. Water makes up from 6% to 10% on average of its content, which makes it advisable to protect it from extreme dryness.

It appears in shades of white, black, red, orange, green, blue, yellow and a rainbow of other colors, of which the most common are white and green, with the rarest being red in black. The colors shimmer due to the refractive structure of the material. The term "opalescent" is erroneously used to describe this phenomenon. In fact, that term refers to the milky look of a form of opal-like substance known as "potch", often found near opal deposits.

Opal veins tend to yield material that is very thin. In order to use this material in jewelry, a special technique often is applied to create "doublets" and "triplets." The former is accomplished by backing the opal with a black material, emphasizing the way the colors play for the eye. The latter also backs a thin slice of natural opal with a dark material and adds a thin, clear dome of quartz or plastic atop. The dome tends to magnify the color display while protecting the opal beneath it, which is inherently fragile.

There are other forms of natural opal that are seldom used in jewelry. These include milk opal, fire opal, Peruvian blue opal and boulder opal. These material are occasionally used in carvings. 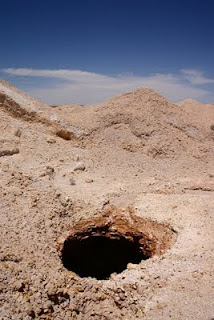 About 97% of jewelry-quality, natural opal comes from mines in Australia. I have visited the opal mines in Coober Pedy, South Australia, which is a major source for natural opal. The otherwise barren, outback landscape is studded with deep vertical shafts and mounds of earth that has been extracted during the mining process. These earthen mounds are often picked through by visitors looking for potch that, while not usable for quality opal, may have some scraps of color. These make interesting souvenirs. We have a few pieces in our collection.


As an aside, "fossickers" - that's what they are called - are not advised to do so at night. 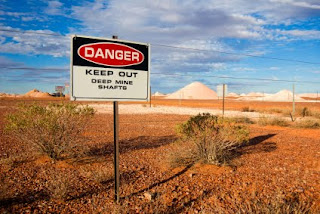 The holes often are unseen in the dark and they are very deep. Bye-bye.

An interesting aspect of Coober Pedy is the homes and rooms carved into the escarpment excavations left behind by mining. One is even a chapel. Because they are underground, they maintain a constant cool temperature, even at mid-day when the outside temperatures exceed 100 degrees.

Andamooka, also in South Australia, is a major source of black opal, as is Lightning Ridge in New South Wales.

Black opal is highly valued for the intensity of the color found in its black specimens.

Importing natural opal from Australia is very expensive. As a result, natural opal usually is priced beyond the reach of Native American jewelry makers.

Given the high cost of natural opal, most opal in Native American jewelry is man-made. The difference can be discerned by the human eye when a magnifier is used to view it. It is much more regular in its color display. Man-made opals also are not as dense as natural opals and may be more susceptible to drying out due to their porosity.

There is nothing inherently wrong with man-made opal, although at one point the Indian Arts and Crafts Association forbade its use in jewelry displayed for sale at the IACA Wholesale Market.

I believe it has since been permitted but only if clearly identified as man-made. It certainly approximates the flare and flash of natural opal when used in jewelry, and at significantly more affordable prices.

If you are considering purchasing jewelry with opal cabochons or inlay, be sure to ask the seller if the opal is natural or man-made. Don't pay for natural opal if you are getting man-made opal.

Opal is the birthstone for people born in October, under the sign of Scorpio. 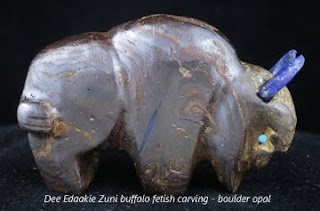 Boulder opal sometimes has been used by Zuni fetish carvers, such as Gibbs Othole, Dee Edaakie and the late Jeff Tsalabutie. It has an almost magical appearance, displaying flashes of color in otherwise bland, brown ironstone matrix.
Posted by TribalArtery at Wednesday, March 16, 2011 1 comment:

This is the third and final part of an article about Delbert Charging Crow, written by the proprietor of ZuniLink.com, which features fetish carvings by Zuni artists and those of other tribes, such as Delbert.
To catch up to the story, scroll down to the last episode. Thank you.

He indeed had been back to his homelands in the Dakotas but was now back in Albuquerque, carrying for his granddaughter, who was attending school in Albuquerque. He was living temporarily in a motel on the east side of town. That was where we met him to look at his most recent carvings.

The more we have learned about Delbert, the more we have come to respect him as person, a friend and a kindred soul, in addition to admiring his gift as a carver. If this is your first encounter with the story of Delbert Charging Crow, we think you will find him as interesting and worthy of admiration as we do.

Delbert tells us he is an Oglala Lakota Sioux, who grew up on the Pine Ridge Indian Reservation in Wanblee, South Dakota. He attributes his inspiration as a carver to his Big Grandma and his Grandpa Jim, who was a stone carver. Delbert proudly states that some of the pipestone pipes his Grandpa Jim carved are in the Smithsonian Institute.

After completing high school, Delbert studied dentistry and became a dental assistant in Wanblee. Three years into this career, he was recognized for his excellence with an Award of Achievement in Dentistry. Delbert's transition from dentistry to full time fetish carver came as the result of a dream, “One day I dreamed Great Grandma appeared to me. She had a handkerchief tied to rope belt with 15 knots. She took them off and showed me they were vertebrae shaped like buffalo, and she told me I needed to carve one. It was a spiritual animal she used for good luck. That day I carved my first buffalo out of alabaster with good thoughts.” (Source: Article written by Delbert Charging Crow.)

Native American Indian names referring to historic activities are not unusual. Delbert's surname is one of those, and refers to a specific event. His great, great, great Grandfather went into battle against the Crow Indians, who were Sioux enemies at the time. He counted many “coup”, which was the act of touching the enemy with a coup stick, without getting hurt. This earned his the family surname name of “Runs After Crows”. It was later changed to “Charging Crow”.

As a fetish carver, Delbert's a style is highly recognizable. He also signs every fetishes with his “hallmark”. He carves many creatures, from many materials, and provides them with sacred medicine bundles. The bundles contain South Dakota sage in a small hide bag, accompanied by crystals, an occasional arrowhead, other stones, beads and feathers.

Each item brings a special power to the carving. The bears carry crystal symbolizing health. They also sometimes carry arrowheads, as direction finders and lenders of strength on the Red Road. Beads stand for luck and health, and represent the burdens the fetish owner carries. Feathers are collected from prairies chickens that die by the side of the road. Delbert goes out of his way to explain that he blesses the dead bird and gives it an offering of tobacco before taking the feathers. He leaves the meat for other animals to feed on.

There are exceptions to adding the sacred medicine bundle. The buffalo does not need one because of its inherent strength. Buffalo were an important part of Sioux life on the plains. The tribe's hunters followed the herd to harvest meat to feed the tribe and skins for clothing.

In this respect, the horse became integral to the survival of the tribe. Once horses were introduced to the plains, the Sioux learned to ride them. Crazy Horse earned his name as one of the first to tame wild horses. Horses allowed the tribe to keep up with the moving herds of buffalo, making hunting, eating and living much easier. When Delbert carves a horse, he adds a stick to the medicine bundle. He told us that it is so the rider will have a “walking stick” in case he wants to dismount and walk instead of riding.

The horse also has been called the “Sacred Dog” because prior to the horse's introduction to native people, dogs were used to carry burdens of the traveling party. Horses became known as “Sacred Dogs” as they more effectively took on the task of carrying people and burdens across the plains.

Delbert says that he thinks about health, strength and travel as he carves horses. He sings and prays that the spirit of the horse will be a strong traveling companion and will help it's owner be more positive in life.

“When I carve the bear, I think about how fiercely she protects. The bear digs for roots, therefore giving her the power to heal,” Delbert informs. He also says his bears all are female. We later learn, however, that bears with turned heads, called “turning bears”, are male. It is said they also represent the act of turning one's life in a good direction from a bad path. Many people acquire them for exactly that reason.