We have just added a number of previously unoffered tribal masks from Africa to the TribalWorks website.

Here are some thumbnails: 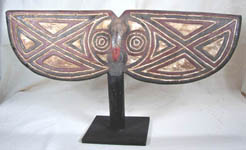 Visit the website for more detail. Click through to the African Room.
Posted by TribalArtery at Saturday, January 13, 2007 No comments:

The Dust has settled.

With Christmas/New Year’s Rush behind us, we are settling into a more “normal” routine.


Well, “normal” may be an overstatement.


In mid-December, Bill had a gall bladder attack that sent him to the local hospital. Two days later, after extensive tests and heavy painkillers, it was decided that the offending organ had to be removed.

Bill is still recuperating. While resting, he has also been working. But it is amazing how much energy that surgery and anesthetics take out someone. So he has been running with some dead battery cells.

Now, however, Bill is back at almost full strength and mental capacity.

On the fetish carving front, new carvings by Melvin Sandoval have been added to his page.

A new otter carved from jet by Melvin Sandoval
In addition, if you are a Gilbert Lonjose fan, you’ll find two whole pages of his carvings newly posted here. Incidentally, since many of these carvings were acquired as part of personal collection years ago, they are priced surprisingly low. 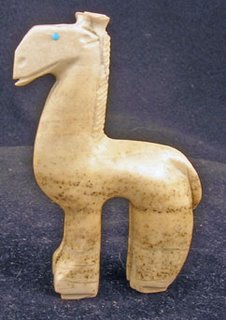 In African art, we are about to post a number of masks from various West and Central African tribes. We have a potential buyer who wants to see them first. Incidentally, this is something we often do for clients who ask us for an item that we may have that is not yet on the web site. You only have to ask and we will send or post pictures to a private page so you can get first shot at it.

But here's a sneak preview. 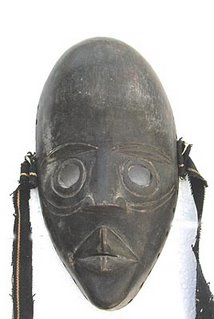 
A lot of Native American Indian Jewelry went out over the holidays, and has been replaced by other items. We expect more orders coming up to Valentine’s Day, another big jewelry day.


In the meantime, we have specifically added a number of cross pendants for clients with a special interest in them.

Heard any good ones lately?

Some people assume that Native peoples don't have much sense of humor, perhaps because their world view is different from that of non-natives.


But they clearly do enjoy a good laugh with (at) the rest of us.

If you ever have the privilege of watching a dance at a pueblo, you will find lots of comic antics by the Koshares.


Similarly, the dancers in African tribal villages participate in extensive mimicry of each other and the Europeans who colonized their tribal areas. In fact, several carvers have done figures that specifically "laugh" at colonials.

A Baule tribe (Cote d'Ivoire) carving
mocking a European colonialist.
And, in Australian Aboriginal culture, their sense of humor also is influenced by their experiences with European "invaders."

In one case, when the whitefella residents of Brisbane evicted the indigenous residents from an area west of town, they asked what the Aboriginal name was for the area. "Goona", they were told and that was the name they printed on their maps. Later, they came to learn that "goona" was the Aboriginal word for "sh*t", they changed the wording on the maps, signs and deeds to "Goodna."


In another case, in a scene from the 1977 movie, Backroads, one of the first films to include indigenous collaboration, one of the whitefella characters asks a blackfella sitting by the road, "Hey, Jackie, can I take this road to the pub?"


The answer was, "You might as well, you white bastard. You took everything else."

~~~~~~~~~~~
Tribal Artery, the blog is a periodic effort by Aboriginals: Art of the First Person and its web sites to enlighten and entertain about world of tribal art. To visit our websites, click any of these links:
Authentic, hand-carved Zuni and other Indian fetish carvings - ZuniLink.com
Beautiful, hand-made Native American Indian jewelry in silver, gold, turquoise, coral and other stones - Native-JewelryLink.com
Collector quality Indian Pueblo pottery - Native-PotteryLink.com
Selected tribal art objects and artifacts from Africa, Australia, the Arctic and Navajo folk art - TribalWorks.com

Posted by TribalArtery at Tuesday, January 09, 2007