This is part two of a special report on Delbert Charging Crow, Lakota Sioux Native American fetish carver and how he carves. Scroll down to read Part One.

Delbert use a specific carving ritual to invest his fetishes with the spirit and power of the stone. He starts by washing with sweet grass and offering prayers to the Creator, the ancestors and the stone people. He gives an offering of tobacco or other substance to Mother
Earth, thanking her for the precious minerals.

People ask how Delbert decides what animal to carve. His answer is typical of that given by most sculptors. The stone tells them what animal spirit is inside. But, for Delbert, the process is much deeper. Animal spirit is not just the evidence of the animal's presence. It is the animal itself, with all the power and support the animal can bring to the fetish owner.

He starts each carving by “blocking” the stone, removing its outer layer. Once that is done, the carving is placed in water, with a reques

t to the water that it bless the stone. The surface of the stone fetish is smoothed and polished while it is underwater. This encourages the positive energy of the water to enter and be absorbed by the stone. When the smoothing is completed, the carving is held up to the Sun, with the request that the Sunboy drink water from the stone and bless the emerging fetish.

Posted by TribalArtery at Monday, February 28, 2011 No comments:

The Zuni people of New Mexico rightfully hold the claim to being the original and most prolific carvers of stone fetishes. Their cosmology and carving traditions go back eons, based on religious beliefs associated with their origins as a people.

Delbert Charging Crow, however, is not Zuni. He is Oglala Lakota Sioux. Yet his carvings are respected by their owners not only for their inventiveness and artistry, but also for their spiritual, protective and healing powers.

A while back, my wife Susanne and I sat with Delbert to discuss his carving, his history and his spirituality. Before we get into that discussion, let's go back to the first time we encountered Delbert's work. It was in an Albuquerque NM Old Town gallery. We were “knocked out” by the quality of the carving and the indefinable appeal the pieces had for us. Since we never acquire any art that doesn't move us personally, we immediately sensed that his carvings were calling out to us, asking us to add them to our collection and our world.

After selecting a few to take with us, we asked where we might find Delbert so that we could tell him how taken we were with his artistry. “He frequently eats at the Church Street Cafe. You might ask them?” It being lunchtime anyway, we walked over to the Cafe and, as if it was preordained, there he was sitting at a table in the front courtyard.

We introduced ourselves, told him of our recent purchases and expressed our interest in seeing him and his work again.

After that, Delbert left our radar screen. We were unable to contact him at telephone numbers he had given us. Attempts to reach him suggested that he might have returned to his homeland in South Dakota.

Two years later, we were searching for Delbert's work again. By now, the original resource was no longer carrying his carvings.. In his free-spirited way, Delbert was on the move. We received a tip that another Old Town gallery had some of his carvings available. As we visited that gallery, Delbert appeared again - out of the blue. No one had called to tell him where we were. He found us anyway, apparently guided by some unseen force.

ZuniLink.com has one of the largest and most comprehensive selections of Delbert Charging Crow fetish carvings online

Posted by TribalArtery at Saturday, February 19, 2011 No comments:

I'm happy to say the crowd was rapt. There were lots of questions afterwords. And no one left early, which always is a good sign. (As a frequent public speaker, I can attest there are few things more debilitating than having an audience member get up and leave during your presentation - even if it just to visit the bathroom).

Anyway, preparing for the presentation and revisiting many pieces of Australian Aboriginal art in our collection, reminded me of how special this genre of art is to us. It was our first love in the field of Tribal Art. It happened to us when we were living in Australia and we first became aware of these talented people and their fascinating culture. We began to acquire pieces of Central Desert art, Tiwi art and Aboriginal art from the Top End.

At the time, exchange rates were much more favorable for the US dollar. Today, the Australian dollar hovers at about par with the US greenback. So Australians who want to repatriate native art to Australia have a much easier go at it.

The trigger for this blog has been the realization that, as we became so caught up in African tribal art, Arctic/Inuit carvings and Native American art, jewelry and pottery, we have put our Australian Aboriginal art in the back of our minds.

That is a shame. So here are examples of some outstanding pieces, and a link to an entire section of our web site devoted to the native art of the antipodes. 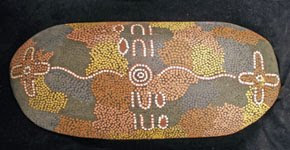 To the left is dot painting on an Australian Aboriginal coolamon, a wood bowl used for gathering and holding bush tucker. Bush tucker is a term for foodstuff that grows in the wild. The dot pattern represents a map of a sort, through which is told the stories of the tribal group's arrival in this world and where important sites are located for food gathering and ceremonial purposes.


Carrying on with the theme of dot paintings, on the right is large canvas painted in the same technique by Anmatyerre artist, Gabriella Possum. It is one of our favorite paintings. It is 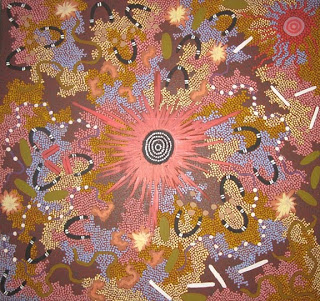 filled with vibrant color and is busy with symbols that the tell the story of Gabriella's country. It is the same country as her father's, the Master Australian Aboriginal artist, now deceased, whose work has sold for tens of thousands of dollars at auction. (Australian Aboriginal traditions require that the name of the dead not be stated.)

The fact that these images are even available for outsiders to see is credited to an English art advisor in Papunya, a central desert settlement, not far from Alice Springs. Geoffrey Bardon convinced the tribal elders to paint images, previously restricted to viewing by Aborigines only, to paint the images on the walls of the buildings that had been erected to shelter these nomadic people.

The results were so electric that a movement was launched. Australian Aboriginal desert art has since enlivened the aesthetics of a quasi-barren land and provided income and sustenance to the natives. The title of this painting is "Bush Tucker Dreaming".

In a different genre, the people of the north, who live in a land of "the wet" for a large part of the year, learned to harvest eucalyptus bark, scrape and cure it and paint on the clean side. It was a natural evolution since the bark panels frequently were used for structures to protect families from 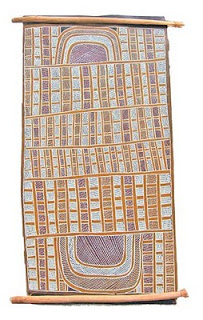 the rain. Materials used for these paintings were natural ochres, ground into powders and liquified, charcoal, and chalk. They were mixed into paints, using sap or ant honey as binder. The image to the left is of one such painting. Dots are generally not used in these paintings. Rather, cross-hatch designs are stroked onto the bark using twigs and small branches. These designs are called "rarrk". They have deep symbolic meanings for the groups that "own" them. Only the owners are allowed to paint a certain rarrk or to permit it to be painted.

These are some of the most secret/sacred designs in Aboriginal art. During one encounter with an artist, we asked her to explain the painting. She started out straight-forwardly but then lapsed into speech that was so faint we coul dnot make out what she was saying. At the conclusion of her explanation, she returned to normal speaking volume. We were told by the white art advisor that she was too polite not to respond to our question, but she could not reveal the information. This gentle stratagem served her purpose and ours.

This blog posting, which started out modestly, has taken on a life of its own. Out of respect for the reader, we will continue it in another posting later.

Thank you for your attention.
Posted by TribalArtery at Saturday, February 05, 2011 No comments: