Turquoise is in...but for how long?

According to McClatchy News Service (), “decoristas” have determined that 2010 will be the year of the color turquoise in home décor. Pardon my skepticism. I remember when lime green was the color of choice in modern appliances, followed by goldenrod yellow. Those colors on appliances now are a pretty good indicator that the 50s was the last time a kitchen was updated. Perhaps turquoise will do better, and have a lifespan somewhat longer than that of a donut in a squad room.

Anyway, if the color turquoise is in, how much more “in” will actual turquoise jewelry be?” Based on its history, turquoise stones will be popular and beautiful for centuries.

We’ve long known that turquoise is a special substance. The Geological Survey (USGS) describes the color as “robin’s egg blue”. But the stone is much more versatile. It presents in shades of dark blue to greens. It is often at its most attractive when it shows threads of matrix or variations within a single specimen from blue to green.

The earliest uses of turquoise have been traced back to at the time of the Pharoahs. The USGS also believes that turquoise has been used by Native Americans and Indian tribes in since 200 B.C. Many cultures believed turquoise had special curative and protective qualities, indicated by changing color if the wearer became ill.

In the American Southwest, the ruins of Chaco Canyon, believed to be the 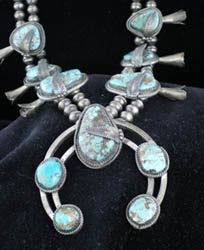 center of massive pre-historic trade route, have revealed extensive evidence of turquoise specimens and nuggets. Turquoise has since found its way in to Native American jewelery as cabochons set in sterling silver and gold, in complex inlays, and as nuggets and heishi in pueblo creations.

It is clearly the most important gemstone used in American Indian rings, bracelets, necklaces, pins, earrings and pendants. It is often combined with other attractive substances such coral, shell, lapis lazuli, sugilite, mother of pearl and opal.

Mines in the American Southwest have been a source of turquoise used by these and other American artists and craftspeople. Despite its origin in large, early deposits in and , most of the best quality turquoise today is mined in the .

Where did the name turquoise come from? Some believe it was so named because , while not a producer of turquoise, was an important transit point for turquoise on its way to European markets. For the record. chemically, turquoise is a hydrous phosphate of copper and aluminum.

Turquoise also has played an important role in fetish carvings created by Zuni Pueblo Indians, as part of their belief system. Today, it often is used to create the charming animal carvings that simulate true fetishes and are sold to a growing body of avid collectors.

Native American carvers and jewelers will use any good grade of turquoise, although they may prefer that which is mined locally. A bigger problem for American Indian artisans is the influx of imported imitations that are not actually turquoise and therefore can sell for significantly less in jewelry that purports to be “real.”

It is enough of a threat to Native American culture and livelihood that the Federal government passed a law, the Indian Arts & Crafts Act, requiring all imported jewelry to carry a tag or sticker identifying its country of origin. Attempts to pass off imports as authentic Native American work are against the law and punishable by fines.

Unfortunately, enforcement of the law does not rise very high on the priorities of Federal agents and, therefore, the incidence of violation is high. The Indian Arts & Crafts Association (IACA) was formed by Native American artists, and those who collect and sell their work, to support enforcement of the law. Members are required not to represent any products as Native American-made if they are not in fact made by American Indians. Aboriginals is a member of longstanding in the IACA.

As an aside, turquoise is traditionally considered the birthstone for those born in December.

As phosphate, turquoise is fragile by nature and sensitive to attacks on its finish and color from various solvents; perfumes and cosmetic solutions. Skin oils and cleaning fluids will also take their toll.

For more information about turquoise and to follow the online conversations of those who mine, cut and collect American turquoise, visit Americanturquoisemines@yahoogroups.com

Regardless of the year, turquoise will enrich your life with beauty as jewelry or carvings. Aboriginals: Art of the First Person offers numerous examples of this beauty on its web sites at Native-JewelryLink.com and Zunilink.com. You’re invited to visit and see for yourself.

Posted by TribalArtery at Tuesday, January 05, 2010 No comments: