A primer on Six Directions of Zuni fetishes.

As one becomes fascinated by Zuni fetish carvings, it is almost inevitable that the collector will learn about the six Zuni directions and the carved animals that are associated with them.

So, how did this association come to be?

The spiritual father of all Zuni people, who was responsible for the creation and understanding of Zuni fetishes, determined that the Zuni people ("A Shiwi") were to be protected in areas surrounding their home.

The protector in the North was designated as the mountain lion.

The protector in the South was designated as the badger.

To the West, the bear was appointed as the protector.

In the East, it was the Wolf.

Protector of the upper reaches, was logically the eagle, who could soar for endless periods while maintaining watch over the people.

The responsibility for protection in the netherworld or underground was given to the mole, who burrows through the earth unseen but senses all that threatens underfoot.

The protectors also were associated with specific colors, although that "rule" has been largely superseded by the tendency to carve animals in whatever material of whatever color is available to the Zuni carver at the time.

These protective fetish carvings are considered "healers". Another set of six directional animals is considered the "hunting" set, with two of the six healing animals being replaced by animals recognized for their prowess as hunters. Coyote takes the place of the bear and bobcat replaces the badger. These animals are considered to have special powers as predators, which they transfer to the owner of the carving. 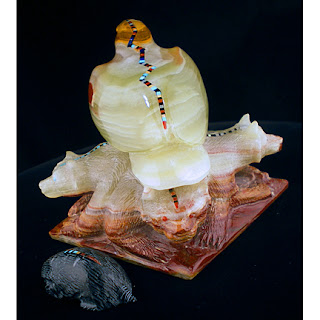 Possibly the most impressive single 6 directions carving the writer
has ever encounter. Although, to tell the truth, it is more than one piece.
The separate mole lodges in a depression in the base.

Among the wealth of beautiful and significant Zuni fetish carvings, Six Direction sets stand out. They are created by several Zuni Pueblo carvers, in several different forms.

Jayne Quam, for example, who lives with her Zuni husband and family on the Zuni Pueblo, has created them with larger single animals, usually moles, and smaller animals of the six directions bound to the exterior with sinew. Also included in the sinew often are nuggets of turquoise, coral, shell or heishi beads. Marlo Booqua also builds on a single mole, as has Daisy Natewa.

Daisy and LaVies Natewa have also created six direction sets with the underlying animal being a badger.

On the other hand, some Zuni carvers create six directions sets carved within a single stone.  Wilfred Cheama is noteworthy in this category. Colin Weeka has also carved a single specimen with six animals

Finally, some Zuni and other carvers create six separate free-standing animals of about the same size, of the same or different materials. The antler carvings of Brian Yatsattie stand out, as do the sets of Stewart Quandelacy, Lorandina Scheche, Robert Michael Weahkie and San Felipe carver, Melvin Sandoval.


All of these examples are sourced from the NEW website of ZuniLink.com. Enjoy.

PS: The carving pictured above was done by Jeff Shetima, in onyx with meticulous inlay. It was judged Best of Category at the 2010 Gallup Inter-tribal Arts and Crafts Competition and is now in our personal collection.

Caution: As a collector of Zuni fetish carvings, you probably will become enamored of six direction sets. When that happens, you will start acquiring fetish carvings by the sixes instead of individually.
Posted by TribalArtery at Saturday, June 20, 2015 No comments: